But it does stand for something new and COOL. Wearable Technology. This is an introductory article into the world of NFC.

No I’m not going to review  fitness tracking devices, Google with Google Glass, the Pebble Smartwatch, the Italian I.AM watch, UPS Jawbone….and the list goes on. I’m going to focus on NFC apparel.

Near field communication (NFC) is a set of standards for smartphones and similar devices to establish radio communication with each other by touching them together or bringing them into proximity, usually no more than a few inches. Applications of NFC include contactless transactions, data exchange, and simplified setup of communications such as Wi-Fi Communication is also possible between a NFC device (your phone) and an unpowered NFC chip (tag).

They are able to incorporate this technology into a variety of uses. Applicable for daily use? We think so.

NFC can be produced within the thread fibers. So you could quite possibly embroider your own technology into a patch and sew it on various items, shirts, bags, hats and customers could utilize its powers. We know companies that can program the chip to fit any need, tap on the patch and users will go directly to your website.

The Pros: Wearing the tech on our body means that you’ll never lose it. But such wearables have to be nice and elegant, so that we do not turn into geeky robotic droids that all your friends will snigger at behind your back.

The Cons: One caveat though, you will need to root your phone, as standard Android does not allow polling of NFC tags at the lockscreen. If you have to unlock your phone before scanning, that kind of defeats the purpose doesn’t it?

A Power Suit which is enabled with NFC technology can make it possible for its wearer to complete a contactless mobile payments transaction without ever having to touch a credit card or wave a smartphone.

This premium high tech clothing uses the Visa payWave system, which uses near field communications. By just tapping your wrist – or waving it over a credit card terminal.

Golfers can record their statistics through a combination of NFC tags attached to each club and Game Golf’s own GYG device — a small box loaded with GPS, motion sensors and Bluetooth as well as NFC.

Wetsuit that Makes you invisible to sharks.

Long sleeved self-heating shirt that is SMART. It knows your ideal body temperature and adjusts automatically.

A sample flexible tag that you can modify to fit on your fingernail, looks like this. 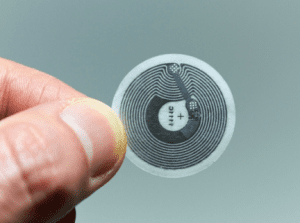